Maruti Suzuki Baleno RS has been the brand’s attempt to enter the hot hatch segment. Sold through the Nexa retail network, Baleno RS has been an interesting car from the brand. Now with the Baleno facelift already launched a few days back, new Baleno RS is gearing up for launch. The automaker has already teased the 2019 Baleno RS on the official website.

The teaser image reveals the complete front fascia of the 2019 Baleno RS facelift and it looks significantly different compared to the outgoing model. The new Baleno RS gets revised headlamps and new grille in line with the Baleno facelift. The bumper has been revamped with larger faux air dams and new central air intake. The bottom front splitter is visible as well.

At the side profile too, the upcoming Baleno RS facelift is expected to receive revised alloy wheels, while rear would boast a tweaked bumper and new roof spoiler. So far, the 2019 Baleno RS comes with a couple of subtle but significant updates, while the basic silhouette remains same. Not only the exterior interior of the new Baleno RS is expected to receive some cosmetic updates.

The newly launched Maruti Suzuki Baleno facelift doesn’t come with much difference inside the cabin. It gets a black interior with blue accented seats. Expect the new Baleno RS to sport similar updates. Also, the touchscreen infotainment system will be updated as well.

Mechanically, the 2019 Maruti Baleno RS will remain the same as the outgoing model. The same 1.0-litre Boosterjet petrol engine will generate energy for the hot hatch. Change in power and torque output too is unlikely to take place. However, we could expect better fuel efficiency from the car.

Some Nexa dealerships have already started receiving pre-booking of the car at Rs 15,000. Expect the hatchback to be available at a slightly higher price compared to the current model. Also, this car is likely to boost the sales of the Maruti Suzuki Baleno RS, once launched. 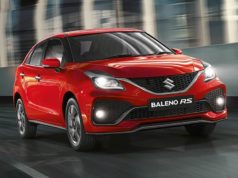 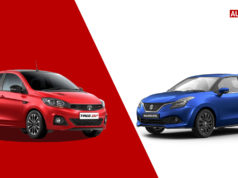 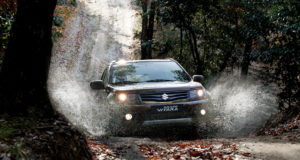